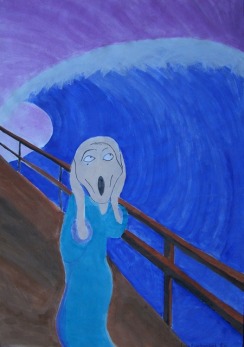 We should never become immune to surprise. Too many things can stop us midstream and make us think about the novelty of our experiences. Every person who has been touched by the loss of someone they love has their own story of what it was like to be the carer of a dying loved one. These are unique stories (though often with common themes) and surprises should be expected.

The movie “Alien”, was a topic at last night’s dinner: That strange science fiction tale where the captain of the space ship is ultimately the lone surviver fighting an alien. The first hospice I ever worked for, and the movie “Alien”, came into existence in the same year, 1979. As I sat thinking about that coincidence, I naturally thought about one person’s story.

Jane was a wonderful daughter, who came from another state to move in with her dying mother. The home was in a serene waterfront setting, with waves that could be heard gently lapping along the shore and birdsong awakening sleepers early in the morning sunrise. But inside the home was another story. The final two weeks, Jane slept in the big bed next to her mother. Deborah suffered progressive terminal agitation as she was dying, at one point described by Jane: “Like she’s being possessed by an alien”. While Deborah was awake, both Jane and I could see the fear and confusion in her eyes that no medication could fully extinguish. When she slept there were brief interludes of what to us appeared to be fleeting expressions of peaceful repose.

As the days marched on, Jane relayed to me how exhausted they both were, and at one point during the night, having given medication which only seemed to allow brief relief, Jane stood in front of the bathroom mirror and enacted the final scene from “Alien”, silently screaming at the reflection “Die, Bitch, die”.

You, my reader, might be both surprised and appalled at such a story. Yet it provided Jane— the daughter who was so full of love and tenderness for her mother— a hilarious and comic-relief moment, both in those reflections during the night and as she told me about it the next day, saying she was certain I would understand even though it sounded “pretty monstrous”. She needed a little hysterical humour in the middle of those dark hours, as mom tenuously hung on day after day and night after night in the midst of dying… which had become so protracted.

There are times as a caregiver of the dying, as much as these dear ones are loved and will be terrifically missed, that a person feels so ready “to be done”. I have reminded many family members of this, while wanting the end to move quickly, and be over, then having an overpowering sense of relief when it finally occurs. Yes, relief. This is “normal” to feel at at the very end of someone’s life here. As much as I hate the word, “normal”, this sense of wanting to hasten the final act of dying might be described as “normal”— even though it may shock us all a little. Some of the hardest days of caring for a loved one are those last ones, that seem to stretch out forever, and most people feel helpless watching a person’s suffering go on and on. So don’t be too surprised, if you find yourself having a similar story to tell, accompanied by a profound sense of relief when the battle is over.

MS, RN, CHPN
View all posts by Amy Getter →
This entry was posted in daughter, end of life care. Bookmark the permalink.

2 Responses to THE ALIEN