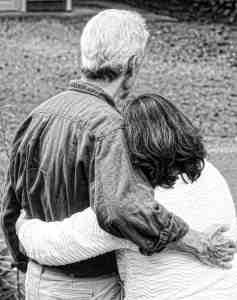 I was reading an article about the ethical dilemmas surrounding persons in a minimally conscious state, which is not the same as a “persistent vegetative state”. Minimally conscious state is sometimes a grey area in medicine, and recovery may or may not be a realistic outcome. I had the experience caring for patients in this limbo state in numerous instances while I was still a critical care nurse. It sometimes felt as though we’d all been transported to a movie set’s surreal scene: a pale, mostly silent patient connected to miles of plastic tubing and their beleaguered families with their exhausted and bewildered faces looming above the hospital beds, looking down on their loved one for some shred of hope amid the pumps and machines whirring in the room.
It was during one of these scenarios that I took care of an elderly woman, Jane, who had collapsed in the 24 hours prior to the intensive care admission. Her heart for many years had been slowly pumping less and less effectively and had finally reached its end point. She had been revived by the medics that arrived at her home after her daughter had called 911, and I had been her nurse for the three days since then, while she briefly regained consciousness to discover herself on a ventilator. She wrote notes to her loving spouse that she was really tired, and clearly indicated life was too cumbersome to continue. “It’s time”, and she would shake her head when he would talk about her getting better and coming home. Her eyes pleaded with her family, while they gently held her hands and told her how much she was loved. Long before a push for public awareness and many people having signed their name on a POLST form indicating whether they wanted resuscitation or not, Jane was clearly writing her wishes on note pads, in simple words: “No more”.
Her third day came and she did not easily waken. The family sat with her throughout the morning, believing she knew they were there at her side. They had initiated the difficult conversation with her doctor the day before, when he made his rounds, clearly advocating for Jane, stating she had “never wanted to be kept alive on machines” and though they had hoped for a different outcome, they knew she was done. The recommendation had been to “see how things looked in another couple of days”. This day they were adamant.
It’s one of the hardest conversations for families—the removal of life support. Yet this family had listened well over the years while Jane’s physical abilities had progressively slowed, and the last thing any of them desired was prolonging this final phase. She had wanted to “just die in my chair some day”. Though things had not happened the way she had hoped, her family were the ones now that had insisted on the discussion, and honored her wishes.
The order was written, the medications were adjusted, and the endotracheal tube was pulled, the machine pushed out of the way, into the corner of the room. Jane didn’t die immediately; her family sat sadly at her side and quietly recounted favorite stories, softly sang songs, or just touched her hand. Though she didn’t answer, she seemed to be listening. It was one of the first families I had ever observed who clearly spoke on behalf of their loved one; who had adamantly insisted on the patient’s wishes being followed; and who firmly advocated for a peaceful and natural death, even in the midst of all our intensive care technology and the “always something more” that could be offered.
Jane died quietly later that night. Her family’s gift to me: insight into some of the other ways to support and love your family member, by allowing a natural death. She didn’t die at home on hospice, but they provided the next best scenario, a vigil at her bedside filled with loving memories and sweet sounds.
I think we have made considerable progress since my early nursing career. More families are talking ahead of time about their hopes for how they want life to end, what they consider quality of life, and how they can support each other as illness and disease progress. These may be difficult conversations to begin, but so worthwhile: How do you picture the end of your life, what’s most important to you? (see The conversation project at http://theconversationproject.org)

MS, RN, CHPN
View all posts by Amy Getter →
This entry was posted in end of life care. Bookmark the permalink.

1 Response to HEART TO HEART