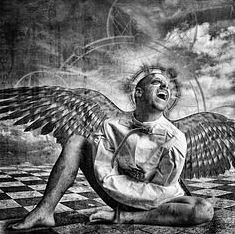 Some symptoms that perplex and challenge the medical professionals that deal with dying patients have terms like “terminal agitation/anxiety” and “spiritual distress” at the end of life.  There are medications to alleviate these symptoms, but not effectively eliminating the tension and angst that accompany dying.  I am reminded of graduate school and my study of Viktor Frankl’s therapy work in existentialism and Logotherapy.  Since that time I have witnessed many dying patients who find deep meaning in their own mortality, and as Frankl said, “When we are no longer able to change a situation-just think of an incurable disease such as inoperable cancer-we are challenged to change ourselves”.

I think of Edward’s death in this light, as a kind of metamorphosis of cerebral dying.

Edward lies in bed and contemplates his life, sharing insights at each visit I make in his last weeks.  At one visit he states, “There is a space between consciousness”….and he
describes dreams he has had recently. He was curled up, in a field, and the wind was blowing, hard. Then he was back here, in his bed, and someone was sitting here.
Waiting.  He wonders about his ethereal visitors and how to interpret these dreams.  Edward has these esoteric and philosophical discussions at nearly every visit.

He is talking his way through his dying.

Of late, it seems the physical change has impacted his mental venture; fatigue affecting his intellectual endeavors.  Now we converse about what it means to be dying in terms of his physical exploration.

He describes in poetic form “This is a calm suffering” and says, “ I realize suffering is life, but this is a deep suffering, (pause), also a deep joy”.   Edward describes to me, “There is the breath of life, I can concentrate on breath”.  (I think to myself how Edward’s lung disease makes this statement eloquent.)

I comment, “That first gasp of breath and the last breath; people say they are similarities to birth and death, what do you think?”

He says with authority, “Birth and death are the same, not opposites.  They’re just different sides of the same coin. The gasp of breath”… a statement he makes, and then
enacts for me. “Is this the end then?” and we look silently at each other for what seems like a long time.

There are hours and days ahead that are complicated with a restless anxiety that keeps
Edward’s partner up during the nights, worrying for Edward’s safety.  Medications have little effect on his anxiety, and I am aware that Edward is still working through concerns that the spiritual caregiver can’t help him with, that his partner cannot relieve, and that none of us fully understand.

I consider myself extremely lucky to hear what Edward shares with me.  Like listening to the maestro coordinate the melodic sounds of the orchestra, and the sometimes discordant
practice session which becomes the perfect symphony, I watch the transition from the philosophical to the reality of what it is to be human and dying.  A day before his death, Edward lays in his bed after a long discussion with his partner about dying.

They have saved a couple of questions to ask the nurse.

I am greeted with, “What will this look like?  How does dying feel?”

And Edward, a little exasperated, says, “She doesn’t know”.

So true. I readily agree…the rest of us who are not dying right now don’t know what it feels like; not yet.  We talk about the shifting and moving from here to there, Edward says he doesn’t believe in “there”, but what “is”…and I suggest that the physical form, what he “is” now, will change.  This physical form is in fact dying, and will be gone soon.

Later that night, Edward said to his loving friend, “I am done now.”  He did not awaken again, and died quietly the next morning.