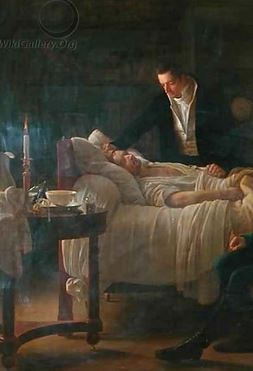 Over the years, I have worked with many intelligent and incredibly competent physicians that have earned my respect and certainly the respect and trust of those who were their care recipients. In the past decade, I have cared for only a few hospice patients who were physicians themselves.  I think it must be both humbling and difficult to be the one receiving care and medical attention when your role was always the “director” of the medical team.

Perhaps that is why it was such a lovely complement from my physician-patient to hear him say “The team has made this whole experience so much better, I couldn’t do this without you all”. This from the man, that I recall, had resisted hospice services for many months, even with a rapidly deteriorating terminal diagnosis.  His agreement to enlist in hospice was only conceded if able to keep us very peripheral, and because close friends and colleagues essentially “twisted his arm”.   But slowly, the team was proving worthwhile.  At this last visit, I had made a rather simple recommendation, one that hospice nurses would find fairly ordinary, we both laughed when he said, “See, that is just what I mean.  I would never have known to tell my patient that.  This is why doctors aren’t hospice nurses!”

I am humbled by his praise, and by his acceptance of the hand he was dealt.  Having been the physician who studied and cared for every kind of pulmonary disease and disorder, he himself is dying from slow paralysis of his respiratory function, incrementally losing his ability to breathe, and one day in the near future his lungs will stop functioning altogether.   But every day, he is making the huge effort to get out of bed, into a wheelchair that supports his now immobile limbs, and keep his mind actively learning.  He tells me that life will have nothing left for him when he is no longer able to use his voice activated computer and read, communicate and learn.

He whispers in response to my remark about springtime arriving, “I never expected to make it to spring. Six months ago my doctor thought maybe two months.  It’s like every day is a gift.  You know, as a physician, I used to think it was bunk when people talked about knowing when their time came to die.  Now that it is happening to me, I know my time is almost up.”  Then in a pensive tone, “I haven’t done everything in my life as well as I could have, but I did my best.  I have enjoyed life…I still have a lot of joy in life.”

Stripped now of what has been years of an identity so difficult to release, he has learned, like we all must someday, the art of letting go.  Rich and poor, wise and foolish, esteemed and scorned, we will all face this same realization: Naked we come…naked we will return.  I have the hope that I could be as gracious as he.

Phrases come to my mind describing this man:  acquiescence when faced with the inevitable;  humility amid great accomplishment;  grace in spite of deprivation; and mastering the art of treasuring what is available today.

Recognizing that this spring day truly is a gift.

Thank you for sharing that gift with me.

…..and I think of each life as a flower, as common

as a field daisy, and as singular,

and each name a comfortable music in the mouth,

tending, as all music does, toward silence,

and each body a lion of courage, and something

precious to the earth.

(from When Death Comes by Mary Oliver)