Why I Love Clara Barton (Angel of the Battlefield) and my Grandmother! 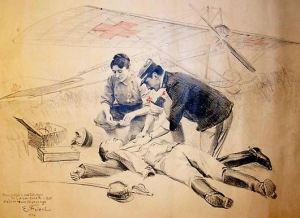 I was never a war nurse.

Clara Barton died over a hundred years ago.

But I love the woman.

I have loved her for many years.

I was deeply influenced by my grandmother. She taught me how to love, actually how to love deeply under times of sadness, bad news, and death. Some of these lessons were learned while being a field hospital nurse in 1918 in France in WWI during the Meuse-Argonne Offensive, the costliest military campaign in United States military history, involving 1.2 million American soldiers, 26,277 killed and 95,786 wounded.

She volunteered for this duty, “because it was the right thing to do.” She was decorated for heroism. A few years ago I traveled to the battlefields where she worked as a nurse. I stood in an American military graveyard in France, surrounded by some of “her boys” who didn’t survive. I wept.

Clara Barton was one of America’s greatest nurses, feeling that it was her duty to help the soldiers on the front line during the American Civil War. She mounted Herculean efforts to raise funds and gather supplies to bring medical services to soldiers, and then worked to distribute supplies, clean hospitals, apply dressings, and serve food to them. From 1862 she worked on the front lines, once having a bullet travel through the sleeve of her dress killing the man she was caring for.  She bore the name “Angel of the battlefield” as a tribute to her steadfast service.

After the war she ran the Office of Missing Soldiers, and also brought her war nursing knowledge to several countries overseas. She was decorated for her efforts and consulted with two US Presidents, helping form and then become the first president of the International Committee of the Red Cross. The Red Cross quickly expanded its scope to refugees and natural disaster under her leadership.

I am just a hospice nurse who keeps a diary. I record the stories of some amazing true life heroes, their families, and caregivers in their final days. Their stories may provide us a blueprint, since they (the only true experts on death) are gone.

They say it takes all kinds to make a world, but I can’t help thinking what a much better world it would be if there were more heroines like Clara Barton and my grandmother.

MS, RN, CHPN
View all posts by Amy Getter →
This entry was posted in nurses are heroes and tagged war nurse. Bookmark the permalink.