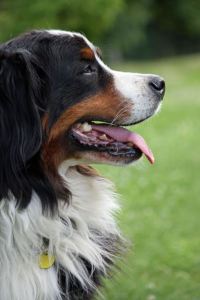 My mother always said that the animals were enchanted, and in another life they will be able to tell us, the humans, all the things that they know, though we give them so little credit. I hear people say, “Animals are very sensitive” and I’d like to add, I am pretty certain that animals really do know things that we, with all our evolutionary advancement, don’t!
I have a visual of a very ancient man, returning home from the hospital to die in his own living room, with his very ancient Great Pyrenees dog lying beneath his bed, only cajoled away for a few times a day, to eat something and to relieve himself outside, hurriedly returning to his master and the sentinel post beneath the bed. And today, another visual, of the King Charles Spaniel lying atop his beloved human mother, with his arms outstretched across her, his face upturned with a soulful, sad look in his huge brown eyes. Though some of her humans had come and gone over the past few days, he had to be physically removed when the priest came, and he remained at her side when she died later in the day.
The death bed vigil. We write about it: the experience of that subdued and sometimes prolonged waiting while someone we love slowly leaves this earth. I myself have waited at my loved one’s side, sensing the moments that seemed to move forward in some time warp that covered us like an approaching fog bank. And along with all the human faces and endearing memories as life slowly dissipated, I have pictures in my minds’ eye; of eagles soaring above, herds of elk silently standing outside the window, beloved dogs who remained constant at the bedside, cats who lay on the pillow and seemed to breathe in the same slowed pattern as their owners. And I think of all the enchanted ones, who cannot tell us how bereft they are to recognize the loss of their human companions, but who remain faithful to the very end.

3 Responses to THE ENCHANTED ONES